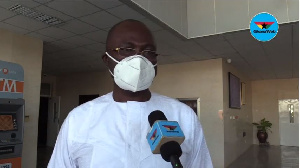 Private legal practitioner, Maurice Ampaw, has described as shocking and disappointing Kennedy Agyapong’s attack on a judge who granted an injunction against him.

Maurice Ampaw in an interview on Neat FM opined that per his standing in the country as a lawmaker, the actions of the Assin Central MP are abhorring and must be condemned.

An angry Maurice Ampaw said the impunity with which Kennedy Agyapong insulted the judge is unfortunate and unheard of.

He noted that Kennedy Agyapong might have mistaken the judge to be one of the ‘pastors and slay queens’ he has been making mincemeat of recently.

“What Kennedy Agyapong is condemnable and it’s only a possessed person who would do that. For a lawmaker and personality like Kennedy Agyapong to do that, it’s beyond my thinking. There is nothing wrong with the injunction by the judge. Anyone who respects the rule of law would have consulted his lawyers on the judgement”.

Though Maurice Ampaw commended the legistlator for showing humility and remorsefulness, he argued that God is using this case to demonstrate to him that there exists a more powerful being than him (Kennedy Agyapong).

“It is normal for someone to apologise after realizing that he has made an error. It’s a signal that he wants to be purged of contempt. But that doesn’t take away the sins. I was totally shocked and disappointed when I heard him. We have pampered Kennedy Agyapong too much and God is using this contempt charges to let him know that no one is above the law,” he stated.

Despite the apology from the maverick politician, Maurice Ampaw holds that the judge will not be sending a good message if he decides to let Kennedy Agyapong off the hook.

He therefore charged the Chief Justice to punish Kennedy Agyapong severely and use him as an example for public officials who in his estimation behave as if they are above the law.

He said, “Kennedy Agyapong thinks he is all-knowing and is a bully. He sits on his radio station and attack everyone including his party members and men of God. I have defended him several times but this one, he should go and face the law. Jesus Christ, the words he said are unpardonable. The Supreme Court judges should handle this case and let Kennedy Agyapong see his smoothness level just we did to Sir John and the others”.

Kennedy Agyapong is facing contempt charges after brazenly chastising and threatening a judge on Net 2 TV on Wednesday September 2, 2020.

Kennedy Agyapong said “You are a stupid judge. I will face you I am not Anas to take bribe from you,” I will deal with you”

A look at Kwame Eugene’s 3 years of twists, turns and a final dive into victory