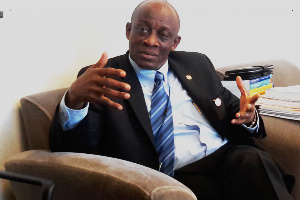 Finance Minister under the erstwhile John Mahama administration, Seth Terkper, has insisted that the administration did not borrow from the Bank of Ghana (BoG) to finance the 2016 budget.

Mr. Terkper’s response is to a Fact Checker report that states that “Mahama’s claim that NDC managed 2016 budget without BoG borrowing is false.”

John Dramani Mahama, currently the flagbearer of the opposition National Democratic Congress (NDC) in the 2020 polls, said at the launch of the party’s manifesto that his administration managed the 2016 budget with zero-borrowing from the Central Bank.

According to Fact Checker, John Mahama administration borrowed a total of GHS 11.2 billion on the domestic market to help manage the budget deficit.

“Out of that amount, the government net borrowed 2.39 billion cedis from the Bank of Ghana. The figure in this report was captured as the provisional figure for the end of the year 2016, which means an estimated figure,” the report stated.

But Mr. Terkper in a rebuttal said as the Minister of Finance at the time, he is compelled to clarify the report by Fact Checker.

As the Minister for Finance at the time, I wish to clarify that the Mahama Administration did not borrow directly from BoG to finance the 2016 Budget.

I signed the Non-Lending Memorandum of Understanding (MOU) with the Governor of BOG, as an IMF Conditionality under the IMF Enhanced Credit Facility (ECF) Agreement, even as we went through the Crude Oil Price Shock (2014 to 2016) and Nigeria Gas Supply (Dumsor) crisis.

BOG performs various roles on the Financial Markets for Govt, including borrowing *on behalf of Govt (MOF).

A) Borrowing FOR (on behalf of ) Govt from Banks and individuals.

Upon borrowing, they become GOG instruments and GoG loans.

See the breakdown of the instruments in Appendix 1 of the Debt Report.

In the Budgets and Debt Reports, while BoG is shown as the “source” of securing these loans, it does not mean that the Central Bank did the lending directly to Govt.

Hence, it is a big mistake for the FACT-CHECK to classify these as BOG Lending directly to the Mahama Govt.

Note that BoG ITSELF is in the Financial Markets to lend and borrow to manage the sector.

B) BOG Lending TO Govt (directly, on its own).

These are simply called Short-term Advances to Government in Budgets and Debt reports.

(Ii) GOG and BOG agreed in 2014 or 2015 to turn the outstanding balance or stock of past Advances into a long-term Bond.

While the BOG Act ALLOWS it to make an Advance of up 5 percent to Govt, as explained earlier, the IMF ECF Agreement did not allow the Mahama Administration to borrow from BoG.

The only substantive amount that GOG received from BoG at the time was “Dividend”, as the sole shareholder of the Bank. This routine is shown as Non-Tax Revenue in Budget.