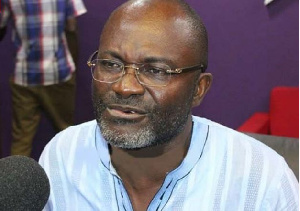 New Patriotic Party’s vociferous lawmaker Kennedy Agyapong has apologised to the Chief Justice and judges in the country after throwing invective at a judge on live TV.

“I have come to the realisation that without prejudice to the substantive case, my expression about the court’s opinion was harsh thus I find it necessary to render unqualified apology without any reservation,” the MP said in a publication in the newspaper.

The loud mouth Assin Central Member of Parliament has been summoned by High Court judge Amos Wuntah Wuni for contempt, after the legislator called him “stupid”.

Agyapong is reported to have “scandalized” and “threatened” the judge and, by extension, the court in an ongoing land case.

On Wednesday, September 2, the lawmaker had threatened to petition the Chief Justice over a judgment given without his knowledge.

On a program on Net2 TV, Agyapong called the judge “stupid” for delivering judgment when he was unaware of the case despite being the de jure owner of the land for 18 years.

“You are a stupid judge. I will face you,” Mr. Agyapong said on his TV station Net2 last week.

He stressed: “I am not Anas to take bribe from you. I will deal with you”.

On Wednesday, the judge issued a warrant for the NPP firebrand to appear on Monday, September 14 at 10:00 am.

He is expected to “show cause why he should not be severely punished for contempt if the matters are proven against him to the satisfaction of the Court”.