; charset=UTF-8" /> Ghanaian pastor Sylvester lost his faith in God after his association with Carlton Pearson – Offtv 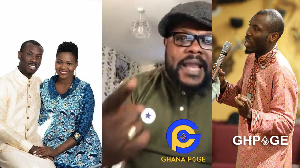 The family of the late Barbara Tommey are still mourning the loss of their daughter after she was shot dead by her husband identified as Sylvester Ofori who is a pastor based in the United States.

As people are trying to find out the exact thing that infuriated the Ghanaian pastor from carrying out such a heinous action a friend to the preacher has come out to reveal what caused this.

According to the friend identified as Nana Adjei who is also a man of God, Sylvester lost his mind after he associated himself with world-renowned preacher Pastor Carlton Pearson.

Nana Adjei narrating what he knows about Sylvester stated that he first met Slyvester through social media after he (Slyvester) had reached out to him following a video he did blasting Avraham Ben Moshe.

He continued that after he finally went to the US for a programme, he was invited by Slyvester to come to preach in his church but he explained to him that he(Nana Adjei) doesn’t preach for money but what he wants is knowing him very well before he would volunteer to preach.

Nana Adjei went on to say that when he finally got that chance, he realised that the books he(Slyvester) was reading was going to lead him to his doom and he told him about it.

Weeks down the line, he saw a picture of him with Carlton Pearson and that was where he tried to raise the red flag that Slyvester was deviating from his faith in God following his association with the American preacher.

He added that for six (6) good months, he has tried to reached out to him to tell him that he was towing the wrong path and needed to come out of it but all his calls where not answered and his messages were never replied.

Watch him talk below:

Poet praises Kennedy Agyapong for his crusade against fake prophets