by sheldon
in Entertainment News
0 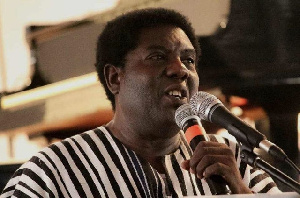 The Ghanaian Choral Composer, Kenneth K. A. Kafui will on Saturday, September 12, 2020, be laid to rest at his hometown in Hohoe in the Volta Region.

Per the burial arrangements, there would be a pre-burial service on Friday, September 11, 2020, at the Madina E.P Church, Trinity Chapel before laying in state at the Reverend Sege Memorial Evangelical Presbyterian Church at Hohoe.

The composer before his death was a lecturer in music theory and composition at the Music Department of the University of Ghana, Legon.

He was also the Director of Abibigromma Theatre Group of the University of Ghana.

He was considered one of the leading composers of his generation in Ghana, in African art music.

He created new concepts and genres in African art music such as the Pentanata, the HD-3 form, and Drumnata.

In the area of career, the late composer, following graduation, joined the University faculty as a teaching assistant in the Department of music.

The following year, he became a senior research assistant and while working at the university, he gained further qualifications, including a Diploma in African Music (1982) and a Master’s degree in music (2003).

Most of Kafui’s compositions are orchestral or choral works or pieces for solo piano.

He also composed for the orchestra of the Ghana Broadcasting Corporation during the late 1970s.

He was also a music Tutor at Achimota School before he moved onto the University of Ghana.