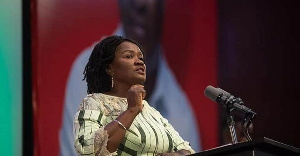 The runningmate of the National Democratic Congress (NDC) Professor Naana Jane Opoku-Agyemang has called on the judiciary to be fair in the application of the contempt of court rule.

The call comes in the wake of the summoning of Assin Central MP Kennedy Agyapong by a High court judge after the lawmaker insulted him on his television station over a land case.

Speaking at a meeting with some civil society organisations in Accra, the former Education Minister said if the judiciary is not seen to be fair in the application of the law, cynicism will grow among Ghanaians.

“Another person does the same thing, also scandalizes the court and just say he is coming to apologise so it is okay; that is corruption. And I want to see that also highlighted,” she said.

Meanwhile, a High Court Judge, Sulemana Issifu, has descended on Mr Agyapong over his recent attacks.

He describes the conduct of the lawmaker as lawless which is worse than the infamous Montie 3.

“Your Lordship, that, Mr Agyapong’s conduct is graver in scope and impact than the infamous ‘Montie 3’. This is because of the influence he wields and the coverage of the channel on which he made these dangerous comments compared to the ‘Montie 3’ in these respects.”