; charset=UTF-8" /> Archbishop Duncan Williams has been a brick in my music ministry – Jayana – Offtv

by sheldon
in Entertainment News
0 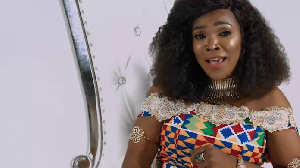 Several gospel artistes in recent times have bemoaned lack of support for rising and mainstream gospel musicians in Ghana.

They complained about how it has been a headache to get financial support from their own churches and when they make an effort to record, pastors, do not support them to market.

Known for her captivating voice, Jayana in an interview with ZionFelix, however, stated that the General Overseer of the Action Chapel International and wife, Rosa Witaker keep supporting her music career and other promising acts in the church as well.

She talked about the church’s music group called Dominion Praise, giving the promising artistes the platform to promote their works.

“Honestly, I thank God so much that I was able to be mentored by Archbishop Nicholas Duncan Williams. He’s been an amazing father me. He has given me bigger platforms to minister.

“Action Chapel International supports my ministry. The church has a music group called Dominion Praise which I’m part and it is headed by a pastor.”

Jayana believes the church can offer more supports to gospel artistes just as churches in Nigeria, particularly Christ Embassy, had unearthed and invested in many Gospel artistes and they had become popular figures across the globe.

“I’ve heard so many stories about some churches not supporting their artistes to excel in their music ministries but for me, my church Action Chapel International and CPIC are different, they give you the platform to minister and help to promote your music.

“I believe the church can give more help to artistes,” Jayana added

Jayana announced her come back to the music scene after a long break releasing ‘VICTORY‘ single featuring Joyce Blessing.

She also released a soul-inspiring single titled ‘I Believe’ during the lockdown period and currently out with a new single titled ‘WHO YOU ARE‘ which is doing amazingly well.

Jayana is a Ghanaian gospel artiste who uses the voice as her instrument, displaying precision and agility, mixed with heartfelt emotion.

Born Jemima Annor-Yeboah, Jayana is noted for her soul-touching ministrations, making an immense impact on followers of gospel music.

Created as an instrument to bless God’s people through worship, Jayana strongly upholds as her credo that as a worker of God she is the salt and light of the world.

She is the second daughter of the Late Bishop Dr Annor Yeboah, founder of Christian Praise International Centre (CPIC).

Born in Accra, Jayana’s musical career started at the age of ten [10] and she has since blossomed into a gem.

Jemima believes that her talent is hereditary.

Her father, Late Apostle Dr Augustine Annor-Yeboah, the Presiding Bishop of the CPIC, used to be a choir boy many years ago.

She participated in the maiden edition of the Stars of the Future talent show, competing with the likes of Irene Logan, Jean now Efya, Ramzy Prince Amui and others.

Jayana’s recording career after ‘Stars of the Future’ began on October 29, 2006, when she launched her maiden album, ‘Awurade Ani Wo Meso’ which was produced by Mr Micheal Nti under Multi Trade Impex label.